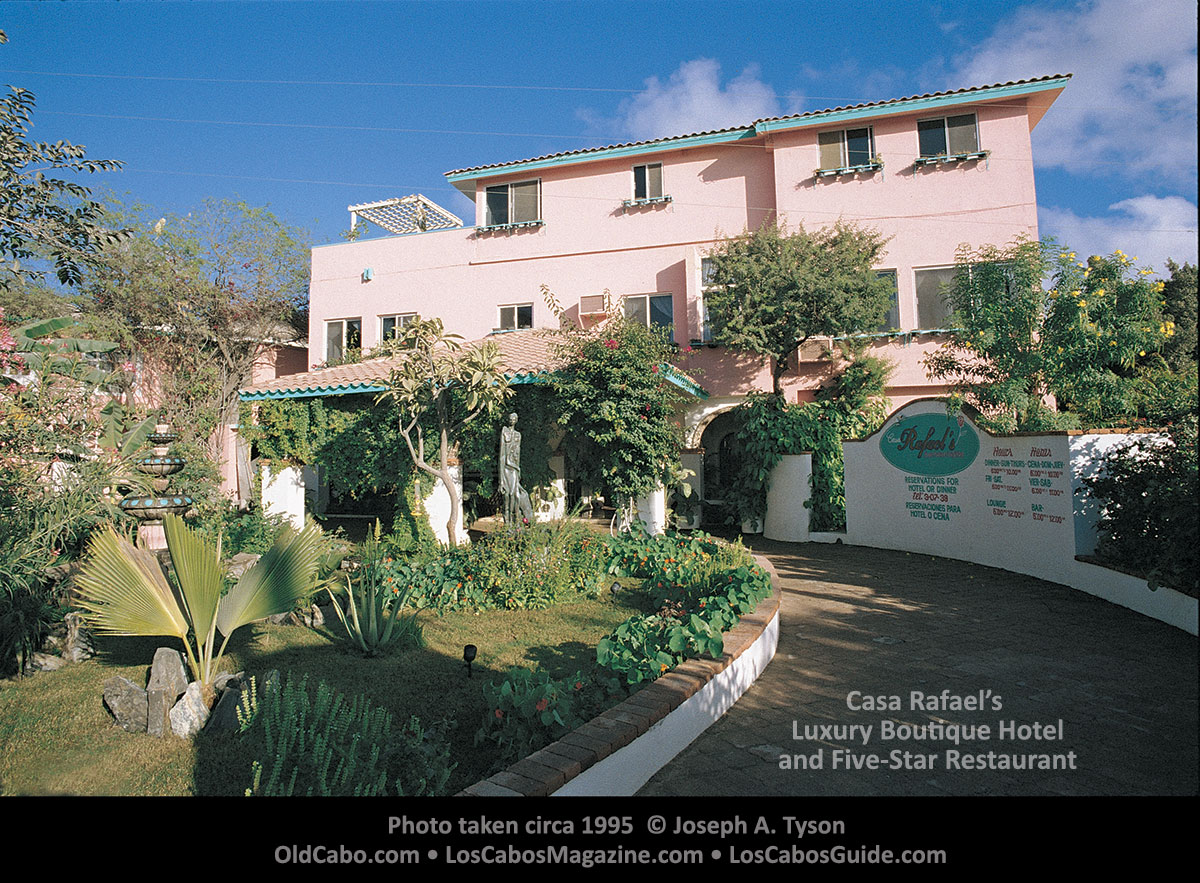 Casa Rafael’s was originally a single family home, previously owed by Alfonso Fisher, that had been added onto over the years  and experienced a major renovation from top to bottom when Rafael Arraut purchased the  property.

This location was previously know as Villa Alfonso’s and owned by Alfonso Fisher.

Fortún Ximénez’s Galeón Conceptión encounter Guaycra Indians of Baja
by cwferguson (Cliff W. Ferguson)
A terrifying wind had been blowing for days from the south. It was the season for winds and the Guaycura had prepared for it. They had gathered nuts and roots and cacti and had built low lying shelters to protect their offspring from the driving sheets of water that always accompanied the October storms. This year, though, the billowing black clouds seemed somehow more ominous; somehow more devastating than any in memory. The winds abated on the morning of the fourth day, the driving rain ceased, and streaks of sunshine began to sparkle from the waters of the foaming sea. The Guaycura began to rouse themselves and move from their temporary encampment. Abruptly, there was a shrill whistle signal. And then another. The women grabbed fearfully for their children as the men snatched up their bows and sped headlong toward the bay.Standing offshore, less than three arrow flights distance, stood a gigantic raft. Upon its decks could be seen a war party of strange beings. Many of them had tangled growths of hair on their faces and all had strange covering concealing their bodies. The Guaycura leader was surprised that the encroaching warriors carried no bows or arrows.The chief glanced at the giant raft and quickly ordered his men from the beach into the cover of the arroyo. Two long canoes had been lowered from the giant raft and the strange intruders were climbing into them with the obvious intent of rowing to shore. An agitated murmur could be hard as the Guaycura warriors positioned themselves for battle.

As the Spanish seamen jumped gingerly ashore they fanned out along the littoral to commence their exploration. Many of them, the Guaycura noticed, carried long sticks; a form of some magic weaponry, perhaps.

One of the invaders shouted something unintelligible and gestured repeatedly toward the arroyo. The other seamen collapsed toward the shouting sailor in battle formation. Directly, there was an awesome thunderclap. The chief watched with dismay as one of his warriors rolled in agony on the ground and immediately ordered the attack.

Dozens of arrows filled the air now darkening from the smoke made by the thunder making sticks. One of the foreigners emitted a shriek, grabbed his throat and fell to the sandy beach. Another, with deep blue eyes, dropped his thunder stick and sagged to his knees. Two companions grabbed him by the arms and began dragging him toward the long canoes.

As the chief was about to release an arrow, one of his warriors shouldered him aside and fell moaning to the ground, half his face a bloody smear. The chief unloosed an arrow that was swift and true. A bearded giant crumpled to the sand. The raiders broke off from the encounter, hurrying now to return to their canoes. A long, warbling whistle signal was heard and the warriors and their arrows fell silent.

The Guaycura watched dispassionately as the two canoes drew alongside the great raft. The raft did not look very sea worthy. Its hull seemed battered in places and the enormous square skins that hung from the tall trees attached to the hull were tattered and torn. Atop one of the slender tree trunks fluttered a smaller skin that was colored yellow and red. The chief and his men discussed the painted skin and decided hat it probably represented the sign of a distant tribe from the south.

Note: Fortún Ximénez, survivors, and Galeón Conceptión raised sail for their return trip south to Huatulco. A few days later they put into Bahía Banderas near Puerto Vallarta and were killed by local Indians in 1533. In 1535, Hernán Cortés would return to La Paz with several hundred men, women and children. Shortly thereafter, the Guaycura would learn the significance of the yellow and red skins.

Brief History of the Baja California peninsula from Discovery to Today by various authors.

Have you Ever Met a Living Legend?
Author:  Brian Blackburn ask@caboguy.com
Posted with permission of author.
Meet Carlos Ungson, one of Baja’s true pioneers. Many people claim to be famous but not Carlos… however, his life story tells otherwise.

Benjamin Ungson (Carlos’ father) was just 16 years old in 1895 when he travelled across the Pacific Ocean from China to Mexico, a whole new world to him. After living in many areas of Mexico, he finally settled in Mexicali where in 1935, Carlos was born. Benjamin insisted that all his children learn to speak Spanish and their native Chinese dialect as well as English.  article continues http://www.oldcabo.com/have-you-ever-met-a-living-legend/

BAJA’S 457 YEARS OF SOMNAMBULENT HISTORY
by cwferguson
Reports filed by Fortun Ximénez with Hernán Cortez in 1533 were unbelievable. Ten sailing days north of Bahia de Tecuantepec, located in the south of New Spain, existed an island populated by aborigines tall in stature and dark of complexion. Every paragraph indicated that the new discovery was the lost island described by Garcí Ordóñez de Montalvo in his 1510 best selling novel, Sergas de Esplandían. If so, the land would be rich in gold and pearls and would be ruled by an Amazonian Queen named Califia. Corte’z was excited.
http://cabo-san-lucas.blogspot.mx/2007/12/brief-history-baja-discovery-to-today.html

Most Famous Map Error in History 1510
Island of California 1510
by cwferguson
The Island of California refers to a long-held European misconception, dating from the 16th century, that California was not part of mainland North America but rather a large island separated from the continent by the Gulf of California.
One of the most famous cartographic errors in history, it was propagated on many maps during the seventeenth and eighteenth centuries, despite contradictory evidence from various explorers. The legend was initially infused with the idea that California was a terrestrial paradise, like the Garden of Eden or Atlantis.
http://cabo-san-lucas.blogspot.mx/2007/12/most-famous-map-error-in-history-1510.html

—————
Cabo San Lucas Past and Present
by cwferguson
Stories, History, and Tales about the area. It’s changing dynamics from a sleepy fishing village to a high class tourist destination in Baja California.
http://cabo-san-lucas.blogspot.mx/