Here are some of the pioneers who were in Cabo San Lucas during the start of the building of the Los Cabos region.
(This list is not complete. More details to be added later.)

Los Cabos has a long history, and has been inhabited, loosely speaking, for more than 10,000 years. For the vast majority of that time it was the territory of hunter gatherers called the Pericú. Very few names of Pericúes are known to us now, and those that are–Chicorí, Botón and Gerónimo, por ejemplo–are primarily remembered for plotting against and killing colonizing Spaniards. Given this lack of reliable information for so much of the human history of the area, it will come as no surprise that a survey of the most important figures in local history necessarily starts in the Spanish colonial period.

Some of these figures were heroic, some were pioneers, while others were merely in the right/wrong place at exactly the right/wrong time. But all 10 played a huge role in making Los Cabos the place that it is today.
This two part series continues at  the links below.

For a more detailed profile and background of Don Luis as a developer I invite you to read Sandra Berry’s interview in 2007 featured in Los Cabos Magazine. 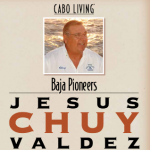 MARCO ANTONIO MONROY MILAN
Baja Pioneers ~ by Michael Koehn
photos by Francisco Estrada & courtesy of Monroy Family
Excerpt from Cabo Living Magazine, Winter 2013
It was 1969 when a budding architect first set eyes on Los Cabos. Now at 75, the still active Baja pioneer recalls the many memories that made his hometown great.
Looking at it now, it’s hard to believe that
Cabo San Lucas was once nothing more than
a neglected backwater in the larger map of
Mexico, an outpost that consisted primarily
of the Pando tuna cannery, a few hardy souls
who made the rustic fishing village their
home, and not much else.
http://www.terrasolbeachresortrentals.com/CABO%20LIVING%20Monroy%20Article.pdf

Hotel Hacienda Beach Resort
Bud Parr, a retired entrepreneur from the Southland who came to Cabo for a fishing and hunting trip in the early 1950s, realized immediately the region’s potential as a tourist destination.  The Parr family purchased Hotel Hacienda Beach Resort in 1977.
Excerpt from article. Pioneer Family Saw Baja Fishing Village Grow Up.  November 17, 2000, by PETE THOMAS
http://articles.latimes.com/2000/nov/17/sports/sp-53237

A  man with a vision who came to Cabo almost 40 years ago, and founded the first high-end residential community in Los Cabos.

Abelardo Rodriguez opened the very first resort, Rancho las Cruces, Baja’s original luxury fishing resort, built on the beach at the base of a remote arroyo near La Paz in 1950. His second resort,  Palmilla at San Jose del Cabo was built in 1956. Founder of the  original Hotel Hacienda Cabo San Lucas in 1962.

December 27, 1938 to  May 7, 2012
Sebastián Romo was born in Mexico City on December 27, 1938. His father was a pharmaceutical chemist, and from a very early age young Romo showed a fascination with aviation. He was able to attend pilot school in his teens and obtained a license to fly commercial aircraft at the age of eighteen. Looking for work as a pilot, he was able to start flying planes that delivered agricultural fumigation in the state of Chiapas. He flew crop dusters for two years there, and that eventually led to more agricultural fumigation work in central Baja.
http://www.oldcabo.com/sebastian-romo-santillan/

Bob Smith, former transmission repair shop owner and recreational fisherman, first thought about the idea of opening a fishing tackle shop after having experienced the thrill of fishing the pristine waters off Cabo himself on a trip with friends.  Minverva’s Baja Tackle opened in 1976. When they first arrived in Cabo and set up for business, there were a total of 12 boats, a few small hotels, dirt roads and no marina.

Article by Brian Blackburn about Carlos Ungson and his many years in Cabo as a developer.

Don Juan Esquivel built one of the first hotels on Medano Beach on the site that originally belonged to Don Yoka. As owner of the fishing fleet “Gaviotas” (“Seagulls” in English), the entrepreneurial Don Juan saw an opportunity to create a haven for fishermen. Those who joined the fleet for three days or more could enjoy a complimentary stay at the hotel, courtesy of Don Juan.

Rogelio came to Cabo in 1926 with his parents. His father would become the keeper of the “Faro Viejo” lightouse and the postmaster while Rogelio found his passion behind the lens of a camera. Years later, Rogelio became known simply as “THE PHOTOGRAPHER” making his living by snapping photos of the daily catch that tourists and locals alike just loved.
http://www.cabosbest.com/minervas-baja-tackle-charters-cabo-san-lucas.html